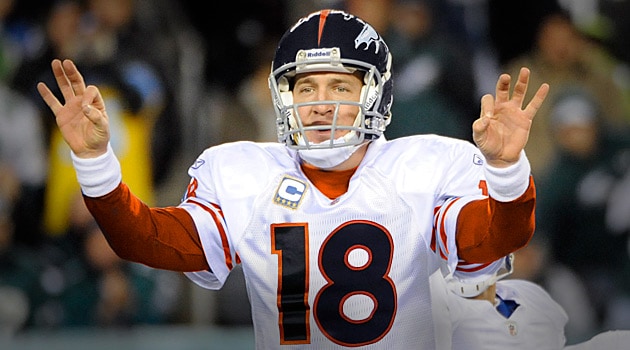 The NFL world was shaken today with Peyton Manning making the decision to go play quarterback for the Denver Broncos, a decision that, if healthy, instantly lifts that passing game and should bring more consistent fantasy numbers to others in that offense. But before jumping on the Manning bandwagon, temper your expectations on Peyton for a new team as there are many differences between the Colts with Manning the â€œGun Slingerâ€ and what could be his new role as Manning the â€œGame Managerâ€.

The Colts with Manning didnâ€™t know how to win less than 10 games. For years they were the class of the AFC South division and Manning led them to post video game type numbers, once having 3 wide receivers with 1,000 yard, 10 TD seasons. They defense played fast, but soft, largely due to being on the field so often because of Manningâ€™s scoring prowess. Donâ€™t expect the same in Denver. The offense (partly due to having Tebow as their quarterback) was a ball control offense and the defense kept their opponents off the scoreboard. The emergence of the youth on the defense led by defensive rookie of the year, Von Miller, will not be strayed from. That fact combined with the strong running game, a John Fox staple, made the Broncos more than competitive as they went all the way to the 2nd round of the playoffs, a feat not many would have expected. Granted, a big part of their rushing success was due to the versatility of Tebow but the fact that teams wonâ€™t dare Manning to beat them with his arm (because he would!) will have a similar effect, pulling a man out of the box. The rushing offense should do well next year, as long as age hasnâ€™t caught up with Willis McGahee who was a nice surprise for fantasy owners last year.