NFL.com Latest news from NFL.com for Miami Dolphins Jarvis Landry fined $24,309 for illegal hit on Aaron Williams Jarvis Landry's hit on Aaron Williams drew the ire of Bills coach Rex Ryan earlier this week, and the NFL has not turned a blind eye, either. Jay Ajayi again named Offensive Player of the Week Dolphins running back Jay Ajayi was named the AFC Offensive Player of the Week for the second week in a row, the NFL announced Wednesday. Blandino: Refs deemed Landry's hit 'a football play' NFL vice president

Playoffs!!!! Hopefully by the time you read this you are much more smiley than frowny and you have worked your way through the ups and downs of this fantasy season, into the playoffs. Many of you are on bye weeks, if so congrats, you’ve earned. For those still alive and now in that infamous must win situation, this week becomes the most important of the year. There are plenty of notes to go over from week 13, but how about those receiver performances??? The top 3 performances of the week Case of the Mondays: Week 13 Waivers and Fantasy Recap

Boy, it looks like Josh Gordon is the real deal doesn’t it? At the beginning of the season, we were all on the Jordan Cameron bandwagon as he was dominating opposing defenses but as soon as Jason Campbell came in, Cameron went back to simply being the brother of Matt Leinart’s baby momma. Not Gordon. Gordon missed the first two games of the season due to suspension and is still 5th in the NFL in receiving yards. He is ahead of names like Dez Bryant, Brandon Marshall, and Demaryius Thomas, 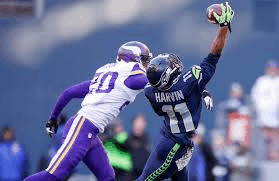 The last week of byes is finally upon us, but it will certainly not be gentle. Red hot Seahawks like Marshawn Lynch and Russell Wilson will be gone. AJ Green will be missed, that Bengals D that led so many to victory last weekend is no mas, and our red hot Eagles as well. Oh and the Bills, if you care. Free agents are becoming more and more sparse as we get towards the end of the season so hopefully you have the proper depth to survive these late byes

Case of the Mondays: Week 11 Waiver Wire and Fantasy Recap

I personally don’t have a huge issue with horn tooting. After all, this is my forum to do with as I please right? I mentioned to you all many weeks ago that Andre Brown needed to be stashed. I continued to preach the pick up with the goal of week 10 being his return to the line up. I did NOT foresee what happened Sunday. Coach speak can sometimes be fairly recognizable and sometimes very difficult. Bill Belichick and Mike Shanahan are typically very good at the latter. Tom Coughlin

I hate the COM’s that start with injury. I don’t care how sinister a fantasy owner you are, nobody wants the elite stars of the league to go down. Monday, we may have lost Aaron Rodgers for significant time, tests still to come. Oh and if you think Rodgers owners are the only ones who should be hurting, ummm nope. Jordy Nelson, James Jones, and Jarrett Boykin owners should be in the dumps as well. All of those players will take significant hits should Rodgers miss the rest of this Beauty, cells, and sofas; all famous sleepers. While not directly related in context, that is the very theme of this article ahead, finding the next famous sleeper. Many people have different ideas of what a sleeper is so I always like to give a quick frame of reference on mine before I begin. A sleeper is a back up or at minimum a later round pick. Despite never starting, I do not consider David Wilson a sleeper because he has a 3rd round ADP or the equivalent of a terrible With each new season comes the unwavering reality of players finding new situations. In the salary cap era, it is very difficult for any team, both good and bad, to remain the same from year to year. The important thing for us as fantasy football freakazoids, is to identify which movers will be shakers and which movers will be stankers. Here is a guide to some of the more important moves from this NFL offseason! QBs Matt Schaub (Hou-Oak) - Schaub wore out his welcome last year in Houston thanks in large With their starting running back out having only amassed a poor 20 fantasy points on the season and their defense ranking 30th overall, the Jacksonville boys finally decided to show up. I am sure that no one saw both Denard and Allen Robinson coming, and if you really like to live on the edge you might have went with Storm Johnson at the flex, though I hope you didn’t.  Hopefully you didn’t partner him with Alfred Morris or a Ben Tate or any one carrying the ball for the Bengals

Hello fantasy footballers it’s me again “THE FANTASY TYPHOON” coming back as promised with another informative dynasty league dominating article. This time we will get you prepared to face your dynasty rookie drafts. Please be advised that these tiers are for a 3 year window so once these top tier 1 players are secured to your rosters give them the ample time to blossom before you get discouraged. Dynasty fantasy football is all about talent and patience folks because talent plays on Sundays.   Before all of the calculator fantasy football rankers